Once upon a time, an English girl met an Aussie girl in the jungle of Northern Sulawesi in Indonesia. They were surrounded by tall trees, volcanoes and the sea; cockroaches and snakes; gibbons and crocodiles and a couple of sun bears too. The evenings were dull. Nothing really happens in the jungle at night for humans. The never ending boredom in the middle of nowhere was dispelled drinking beer and sharing stories, even if they were the only two people in the vicinity to partake. In the middle of nowhere this potty mouthed Londoner and this wild haired veterinary Sydneysider became fast friends.

This friendship was born out of large Bintangs and late night cheese toasties, and has continued through the years with food as a constant thread between us, even when I once accidentally made my friend sit through a BBQ full of every type of meat going with my family, not realising she had gone veggie since the last time I’d seen her and she was too polite to tell my dad after he raved about the meat his mate the butcher had provided for the occasion.

Jess comes from a beautiful part of the world, the Northern beaches of Sydney, and as much as I love Sydney city, I really love escaping up the coast a little and staying with my friend. Not least because I love my friend made in the most unlikely of places, but because going to Avalon means a trip to one of my favourite restaurants in Australia that she introduced me to – The Boathouse.

The Boathouse originated in Palm Beach, otherwise known as home to Home and Away, but luckily for Sydneysiders, they have new outposts edged around the city, at Balmoral in Mosman and Shelley Beach in Manly. The whole dining experience here is everything it should be in Australia – al fresco, by the water, fresh food (plenty of it healthy) and good, cold wine. It just feels Australian.

There is plenty of seafood, and I can personally vouch for the high standard of battered fish and thick cut chips they serve up here, as well as a beautiful fish pie. In fact the chips are amazing and deserve a proper mention; seriously crispy but fluffy on the inside, and plenty of them. Salads are colourful and plentiful, scarlet beads of pomegranate seeds adding a brilliant crunch; the bucket of prawns a popular choice and the burgers not amiss either. The wine list isn’t overwhelming in size, but all expertly picked and naturally, predominantly Australian.

Whilst I haven’t had the pleasure of a Boathouse breakfast, the menu includes all the usual suspects, with avo on toast with poached eggs, bacon and egg rolls, french toast, bircher muesli and the very Australian healthy breakfast of a veggie bowl with eggs, avo, smoked salmon, brown rice, chilli and greens. The coffee is very good too, cappuccinos and the like beautifully presented with a smattering of chocolate shaped in their signature anchor logo. There’s also a deli of delicious fresh produce, and there are rustic tin vases of beautiful blooms you can purchase too.

There are many restaurants in Australia that make me wish I could pop over for a weekend, just eat and drink and catch up with the many friends who have made the move, but The Boathouse is up there among the ones I miss most. 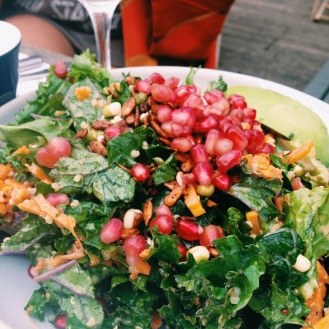